June saw the cost of living crisis deepen as the new tariffs for gas and electricity hit beleaguered families and fuel hit the dreaded £2.00 a litre for diesel in some places, oh on top of that the Bank of England increased interest rates for the fifth time in as many months, as inflation hit double digits. The worry for most people is there doesn’t seem any sign of the government getting to grips with the situation.

The national press in particular seems to have taken to predicting doomsday for the housing market and house prices, but as yet, it remains buoyant and resilient, although the rate of increase dropped to just 0.3% in June, which equates to an annual change of 10.7%, down from 11.2% in May, the eleventh month in a row house prices have increased.

When we break that down to SK8 and SK3, the picture remains pretty healthy with demand continuing to outstrip supply, although there has been a correction in the imbalance as you will see in the statistics.

Looking back at the national picture, Robert Gardner, the chief economist of the Nationwide building society said “ UK annual house price growth slowed modestly to 10.7% in June, from 11.2% in May, prices rose by 0.3% month on month, after taking account of seasonal effects, the 11th consecutive monthly increase.

Tentative signs of a slowdown

There are tentative signs of a slowdown, with the number of mortgages approved for house purchases falling back towards pre-pandemic levels in April and many agents and surveyors reporting a softening in new buyer enquiries.

Nevertheless, the housing market has retained a surprising amount of momentum given the mounting pressure on household budgets from higher inflation, which has already driven consumer confidence to a record low” commented Gardner.

Part of the resilience seems to be the strength of the labour market. Obviously if the current problems start leading to a cut in the workforce, this could have a hugely damaging effect on the market. Stockport has a very high employment rate. The low level of properties coming onto the market is also helping keep upward pressure on prices.

The market is expected to slow, but to what degree remains uncertain as the pressure is ramped up on household budgets in Q3 and Q4 and the Bank of England increase interest rates further, as is widely expected.

What’s coming onto the market? 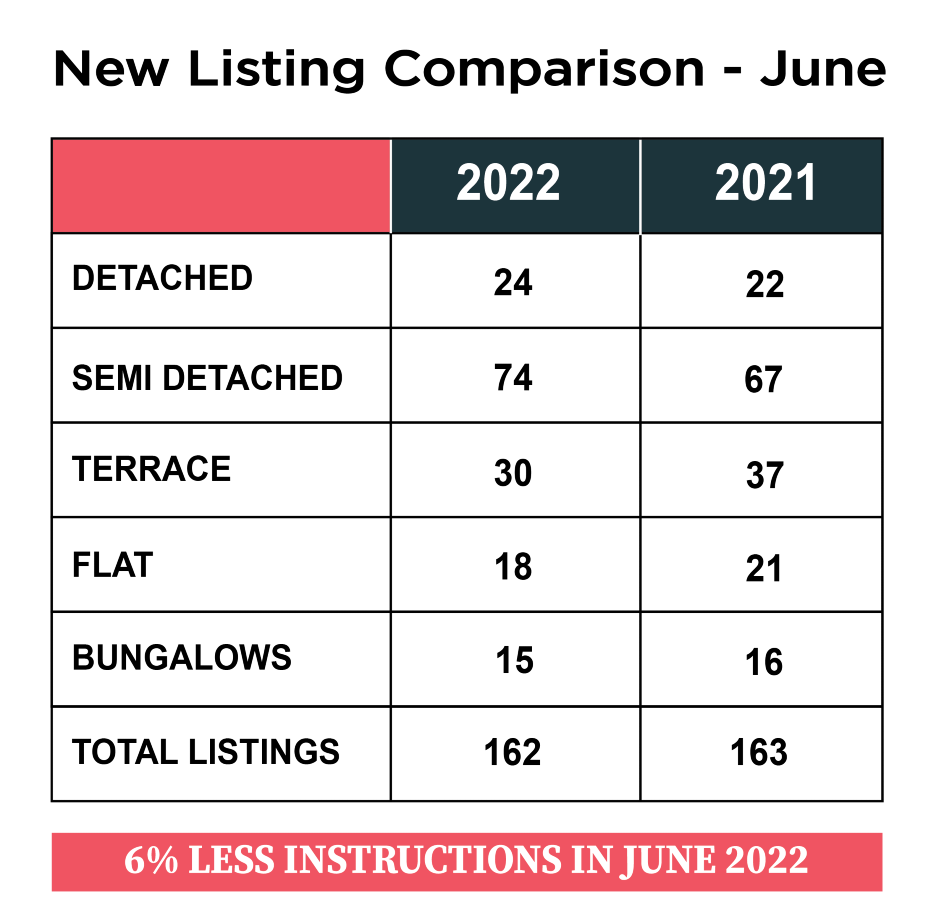 When we double down and micromanage our own stats for the SK8 and SK3 area, we see that the number of new instructions coming onto the market in June, were virtually the same as the previous June. What is interesting when you break down the stats further is the number of detached and semi detached homes coming on to the market is higher than last year, but there was a big drop in the number of terraced homes, flats and to a lesser extent bungalows.

Is demand dropping off?

We saw a 20% drop in the number of daily property views on Rightmove in May and wondered whether this was a blip or a trend? Well, it is a similar drop off  – 18% in June, so the numbers are definitely down, but with the average number of houses available down 31% from 483 in June 2021 to 331 in June 2022, that could clearly be a contributory factor. So, I guess whether you believe the press narrative, people are feeling the pinch in the pocket or just getting fed up with the lack of stock, will determine your viewpoint! 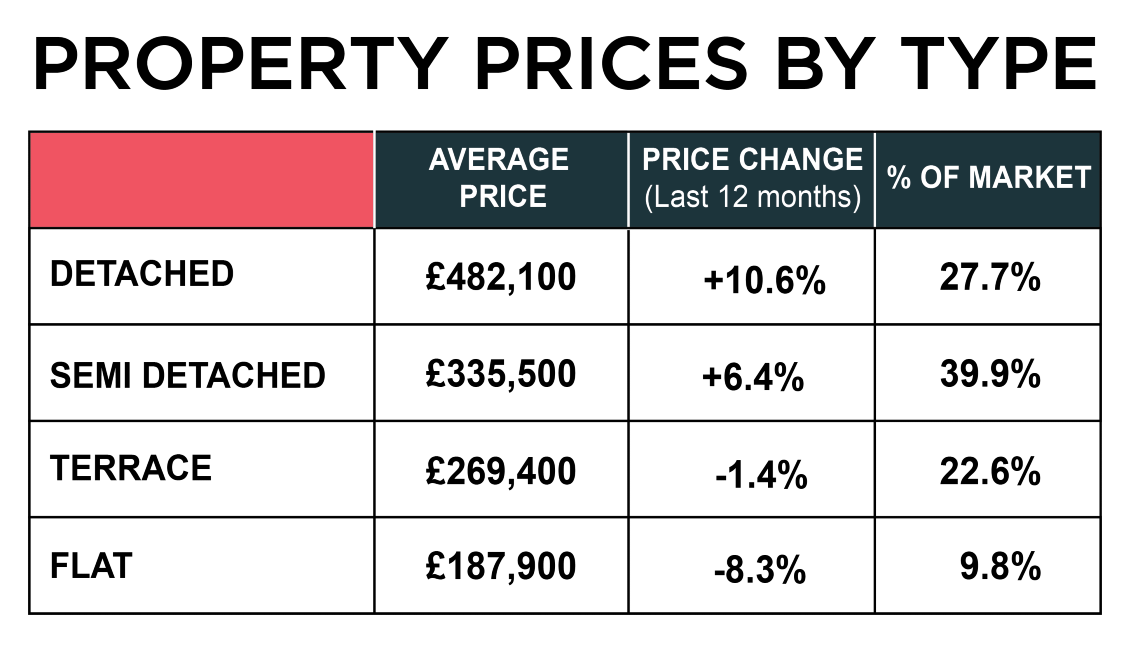 The year-on-year average percentage price increases have been dropping now for four months in a row. However, if you own a detached house in the Cheadle area, you have still seen the value of your home increase by over 10%. Semi detached homes have risen in value over 6%, but terraces are down just over 1% in value and flats have dropped the most, at just over 8%. The demand for detached and semi-detached homes in the area and the lack of numbers coming onto the market is encouraging for those thinking of selling.

Sales drop back in June 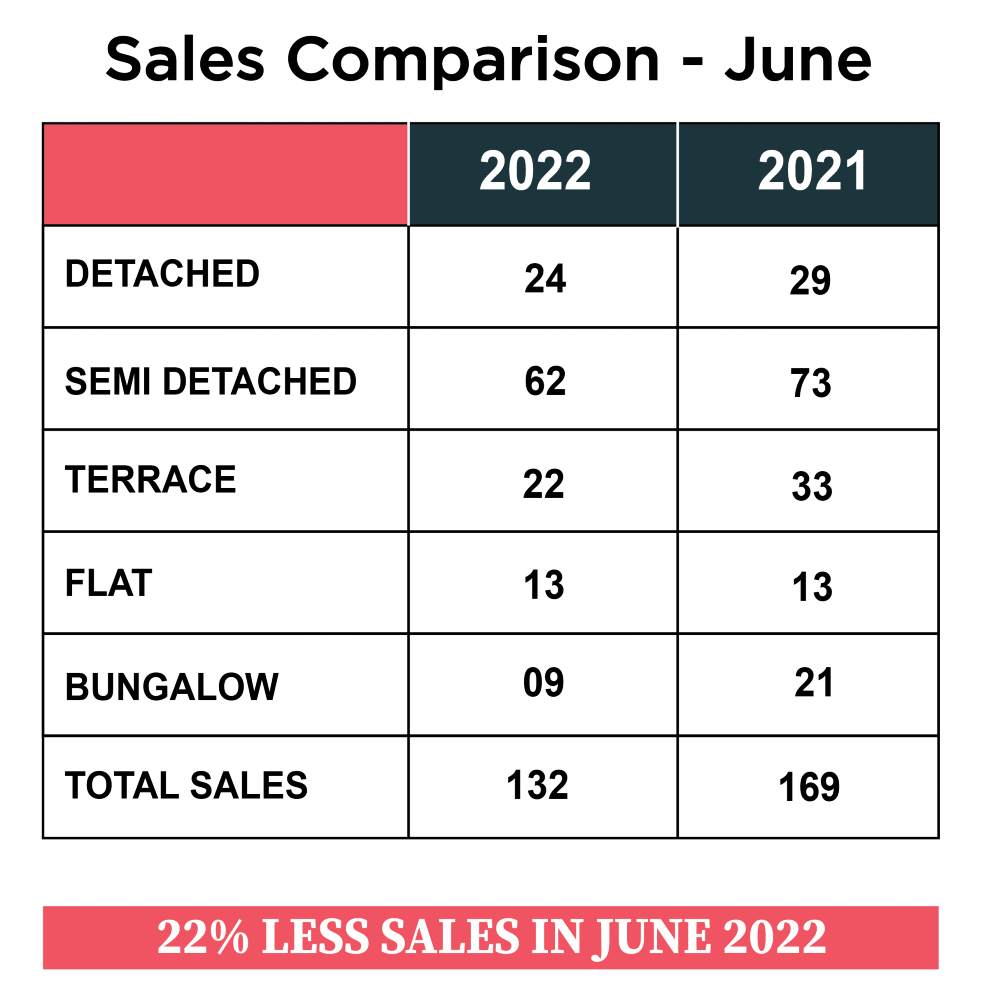 When you analyse the break down, you can see that every style of property – except flats have seen a significant drop in sales.

The market in SK8 and SK3 remains strong, but there are one of two indicators to suggest that the strength and positivity is starting to drop ever so slightly, and it remains to be seen whether the continued pressure on household budgets and rising interest rates impacts homebuyer’s plans, whilst at the same time forces more people to sell and the current imbalance starts to swing the opposite way. We feel that the market faces some significant challenges in Q3 and in particular Q4, and we expect the picture to become clearer as we head into 2023, albeit it is very difficult to predict too far ahead with the spectre now looming of a snap general election. We therefore continue to advocate bringing any selling plans you have forward to safeguard your price and the prospects of an easy sale.

If you would like to know the current value of your home in today’s market, please call Joe, Patrick or Maurice on 0161 428 3663, e-mail sales@mkiea.co.uk or visit our website, choose your preferred method of market appraisal and book online here Book a FREE valuation

The Kitchen is the hub of most homes these days and its importance to buyers can therefore not be underestimated. Therefore, we have put together four dishy tips to make your Kitchen irrestible to buyers when selling.
Read Article

What is the benefit of making your Cheadle home greener?

Soaring energy bills are something that none of us can ignore at the moment and the cost-of-living crisis is expected to worsen this winter. So, can their be a dual benefit to making your Cheadle home greener?

July provided the experts at Zoopla with the perfect opportunity to evaluate how the last two years have affected the UK property market. Its headline statistic – pandemic housing boom creates 270,000 property millionaires – won’t apply to the majority of homeowners but the rest of its analysis will.