So, here we are at the halfway point in the year! The Government delayed the full lifting of Covid restrictions on the 21st June, which will have been disappointing for the hospitality and travel industries in particular, but the vaccine roll out continues at pace and the England football team are allowing us to dream once more that it might be coming home for the first time since 1966!

In the housing market, the stamp duty holiday window closed with a stampede to get deals done before the 30th June, although the taper continues until the 30th September on the first £250,000 of a purchase, so many first time buyers can still make a significant saving. Here in Cheadle, we had a record Wednesday 30th June with a record 12 completions on the day! Hats of to those beleaguered conveyancers who worked overtime to get those deals done for people.

So what’s next for the Cheadle housing market? There is talk things may start to cool off and the market return to some form of stability. Let’s take a look at the stats and try to figure out what is really going on.

June’s rise was significantly smaller than May’s 1.8 per cent increase, or April’s 2.1 per cent, which Rightmove said indicates an early sign the current hectic housing market is slowing.

With that said, this month’s price rise marked the largest June price increase since the summer of 2015.

Cheadle however continues to buck the trend and we do not see any immediate prospect of the local marketing cooling anytime soon. Look at the stats – sales are down a modest 5.2% on June last year, but we put that down to the fact stock levels are extremely low, probably the lowest in the last 10 years. 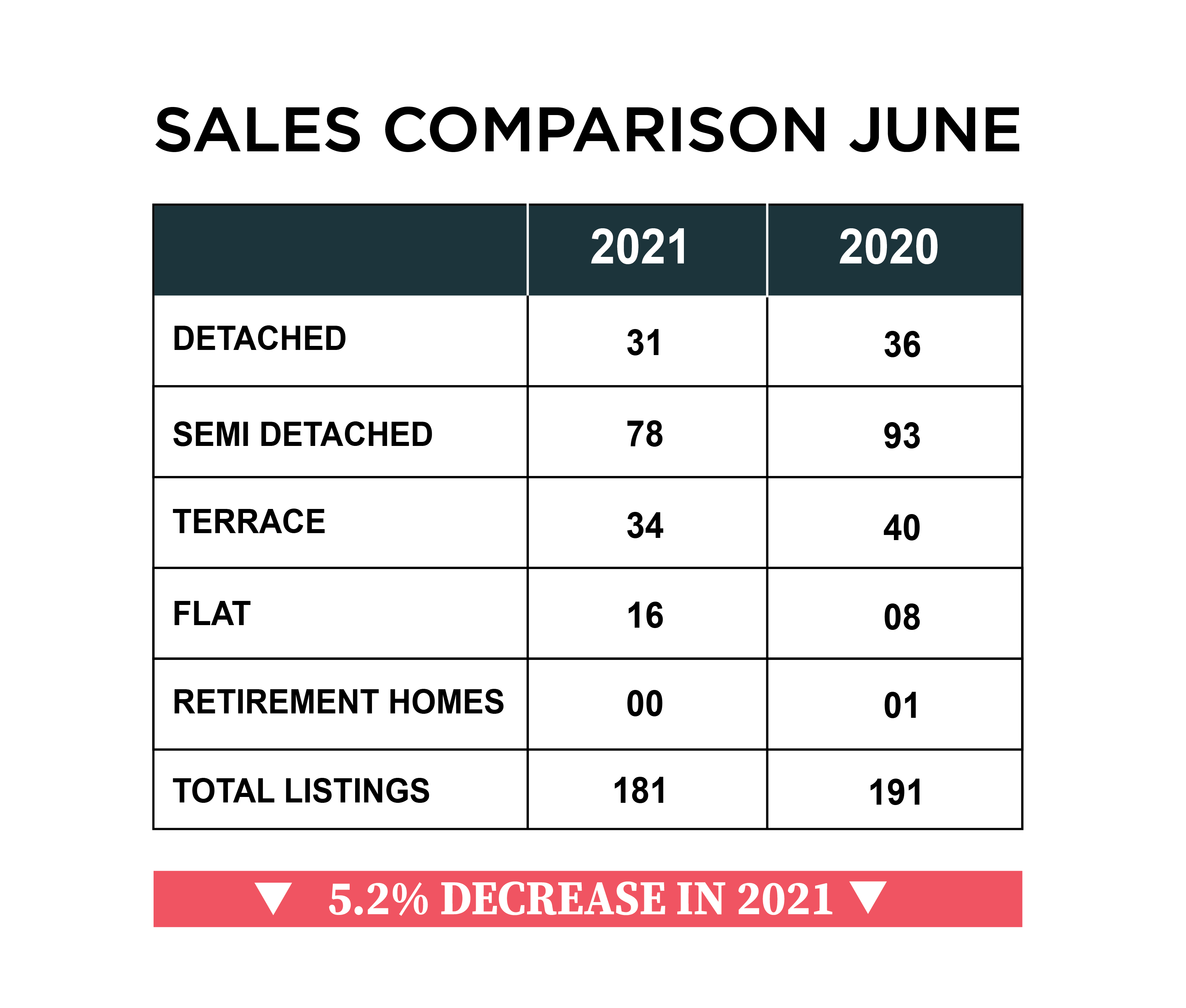 This is born out by the fact that listings in June are down almost 30% on the previous year and stock down 37% on average per agent, whilst the number of people carrying out detailed daily property views on Rightmove is up 51% on last year, which indicates there is still huge buyer demand.

This is echoed by Tim Bannister, Rightmove’s director of property data, said: “Buyer demand remains very strong, though with an all-time low in the number of properties available for sale on estate agents’ books and new stock at higher than ever average prices, there are early signs of a slowing in the frenetic pace.”

When you look at the listings by type in Cheadle, the biggest gap in the market is clearly semi detached and detached family houses, which are down 58% and 174% respectively on June 2020, yet on average detached houses have gone up in value 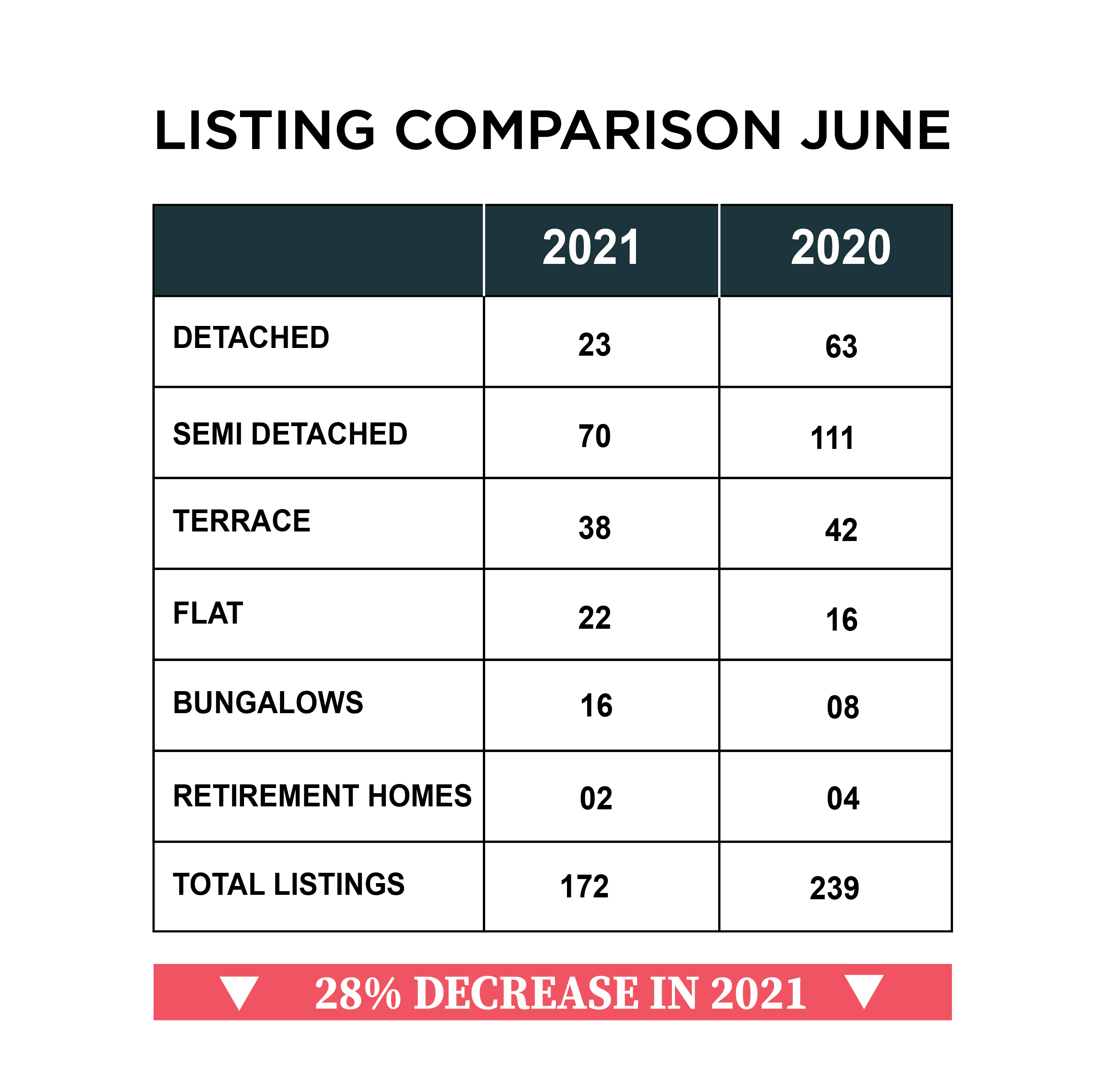 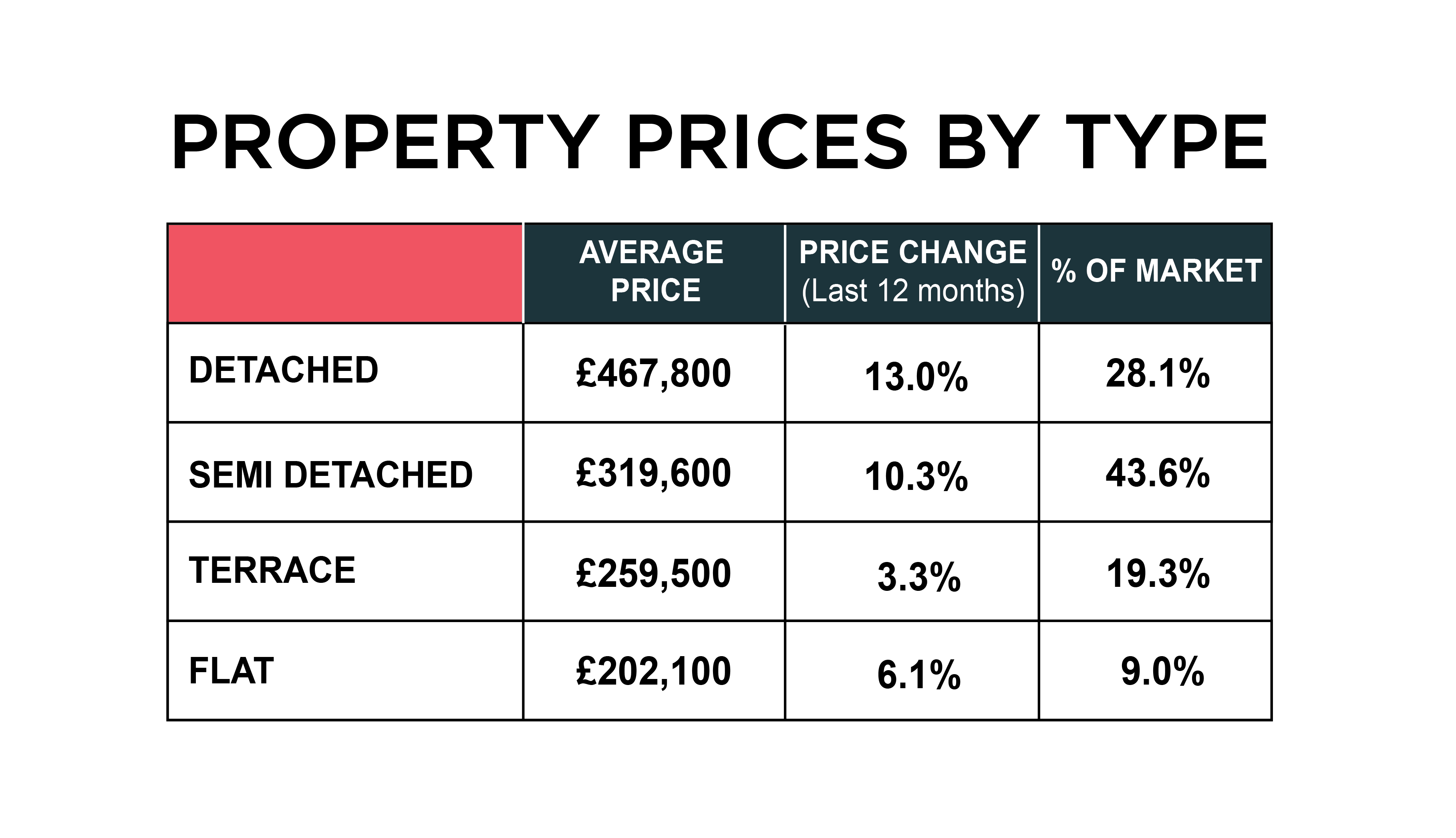 Since the introduction of the stamp duty holiday last summer, house prices have rocketed, as buyers sought to avoid tax.

Buyer demand has continued to outstrip supply, and the market’s size is constrained until supply picks up again.

According to Rightmove’s figures, the number of sales agreed by estate agents in May was 17 per cent ahead of the comparable period of 2019, a slackening of the pace recorded in April when sales agreed were 45 per cent higher than in April 2019.

Bannister continued: “Since the market re-opened last May in England we have seen huge jumps in the numbers of sales being agreed, but these are now rising at a slower pace.

“Record low interest rates and stamp duty tax reliefs have helped many to afford higher prices, satisfying their pent-up desires for a new home fit for a new era.

“Some of that demand has now been met, and the phasing out of stamp duty reliefs has also taken away some of the urgency to move, though our high traffic and search data indicate that there is still strong buyer demand.”

However, he said higher prices, combined with a lack of fresh choice coming to markets are reducing some buyers’ ability or desire to move.

“While we expect the market to remain robust, there are early signs of a slackening in the incredible pace of activity that we’ve seen over the last year,” he added.

Our own view is that the imbalance between supply and demand may start to correct itself towards the end of Q3/Q4, but unless there is a sudden significant influx of stock to the market, the problem will remain. At the moment many sellers are reluctant to put their home on the market as there doesn’t seem to be anything suitable for them to buy, it’s a self-perpetuating cycle and so the problem goes on.

One of the biggest decisions you will make when you sell your home is choosing the right estate agent to get your house sold.  There is a wealth of choice, from high-street estate agents to those working online; from big national companies to well established local independent estate agents, such as ourselves.
Read Article

Adding shade to your garden this summer

Deciding to add a form of shade to your garden can prolong the amount of time you can sit outside comfortably – and provide somewhere to entertain even if there’s a sharp summer downpour. What type of shade you opt for will depend on your aim, approach to building work and budget.