April hasn’t been a great month in general. From the ongoing awful pictures we’ve seen on our tv screens every night from Ukraine, the depressing rise in energy prices following the lifting of the energy cap, escalating fuel prices, increases in our national insurance contributions and as we move into May, a fourth rise in interest rates in as many months is anticipated when the Bank of England monetary committee meet on Thursday 5th May, the same day as the local council elections in many parts of the country. It is certainly a tough time for many families.

Yet bizarrely, the housing market across the country and in SK8 and SK3 in particular, the market remains extremely buoyant, with the Land Registry saying prices rose by nearly 11% year-on-year in February. Other indices support this metric with Rightmove suggesting prices have gone up year on year 10%, the Halifax 11% and the Nationwide suggesting 12% growth.

However, many experts think we’re unlikely to see such rapid rises as 2022 progresses with Savills predicting modest growth for prices for the rest of 2022 and only 3% in 2023 as the recession bites.

There’s such a mismatch between supply and demand

After the home-moving frenzy of 2021, there’s now such a mismatch between supply and demand. A recent survey by the estate agency Savills found that 9-in-10 current house hunters have had their search affected by a lack of available properties. The estate agency trade body Propertymark reported an average of 84 prospective buyers registering with each estate agent in March. It says 84% of properties sold for the asking price or above, compared to 80% in February. The imbalance between supply and demand is reflected in Rightmove’s ‘time to sell’ data. The property portal estimates that homes took an average of 33 days to sell in March, down from 36 days in February.

So, despite the air of negativity generally, the house market seems to be robustly standing firm, although we believe much of this is driven by the acute shortage of stock. If that changes, the market could take a downturn and quickly.

House prices continued to climb in April but the rate of growth is slowing as soaring inflation and the cost of living crisis starts to affect the market, figures show. The average amount paid for a home in the UK climbed 0.3% to £267,620 in April on a month earlier Nationwide found, the ninth consecutive month of growth. However, the rate of house price growth slowed from a 1.1% rise in March and is the smallest increase since September last year, according to the monthly property index from the building society. The boom has been fuelled by a shortage of housing stock and a pandemic-fueled hunt by city dwellers for larger houses, gardens and more rural living. However, Nationwide believes the market will slow as household budgets are squeezed and mortgages become more expensive.

“It is surprising that conditions have remained so buoyant, given mounting pressure on household budgets, which has severely dented consumer confidence,” said Robert Gardner, the chief economist at Nationwide.

“We continue to expect the housing market to slow in the quarters ahead. The squeeze on household incomes is set to intensify, with inflation expected to rise further, perhaps reaching double digits in the quarters ahead if global energy prices remain high. “Moreover, assuming that labour market conditions remain strong, the Bank of England is likely to raise interest rates further, which will also exert a drag on the market if this feeds through to mortgage rates.”

The average price of a UK home has risen by almost £50,000 since the start of the coronavirus pandemic in March 2020, according to Nationwide.

“Mortgage affordability is a growing concern. The window for cheap mortgages is closing rapidly and the spectre of higher interest rates means that mortgage rates are likely to return to levels we haven’t seen in a while. The property market remains tough for homebuyers and is set to get tougher from an affordability perspective.”

Sit and wait – but for what?

Clearly, as you can see from the chart below, new instructions remain the biggest challenge to the Cheadle and surrounding markets. Listings were down 24% in April by comparison with the previous year. The biggest gap was in the semi-detached family home market down 33% and flats down 55%.

Therefore, in the short term, it remains very much a seller’s market and anyone considering moving, may well want to consider bringing those plans forward if they want to achieve the best possible price. 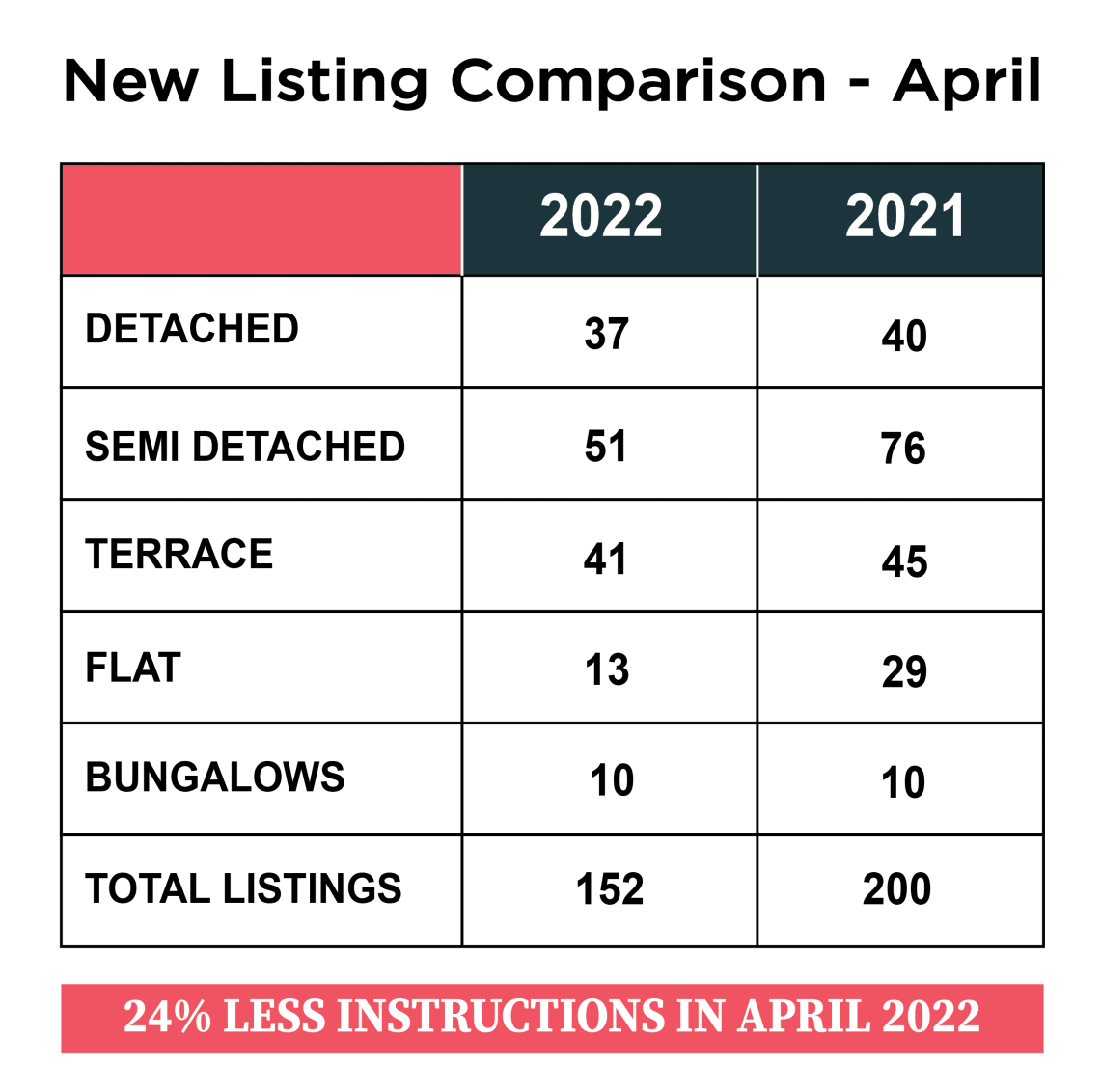 Demand continues to outstrip supply – at least for now!

Our second image looks at the average number of available properties during the month and the number of daily property views on Rightmove. The number of available houses dropped from 528 in April last year to just 375 in 2022 – a drop of 29%, yet the number of detailed daily property views increased 9% from 193 in April 2021 to 210 in April 2022, which when you look at the available stock, would suggest, for now at least, there are still plenty of people looking to buy a property. Despite the rises in interest rates, money is still relatively cheap to borrow, but the acid test over the coming months may be how much disposal income they will have available to increase their future borrowing?

The rate of increase has certainly dropped over the last three months but is still healthy when you look at our third chart. The lack of detached, semi-detached and terraced homes coming onto the market is keeping the prices high and when you think the area is made up of over 40% semi-detached homes, yet this is where the biggest gap in the market exists, so it makes sense that the upward pressure on semi-detached houses in so high. 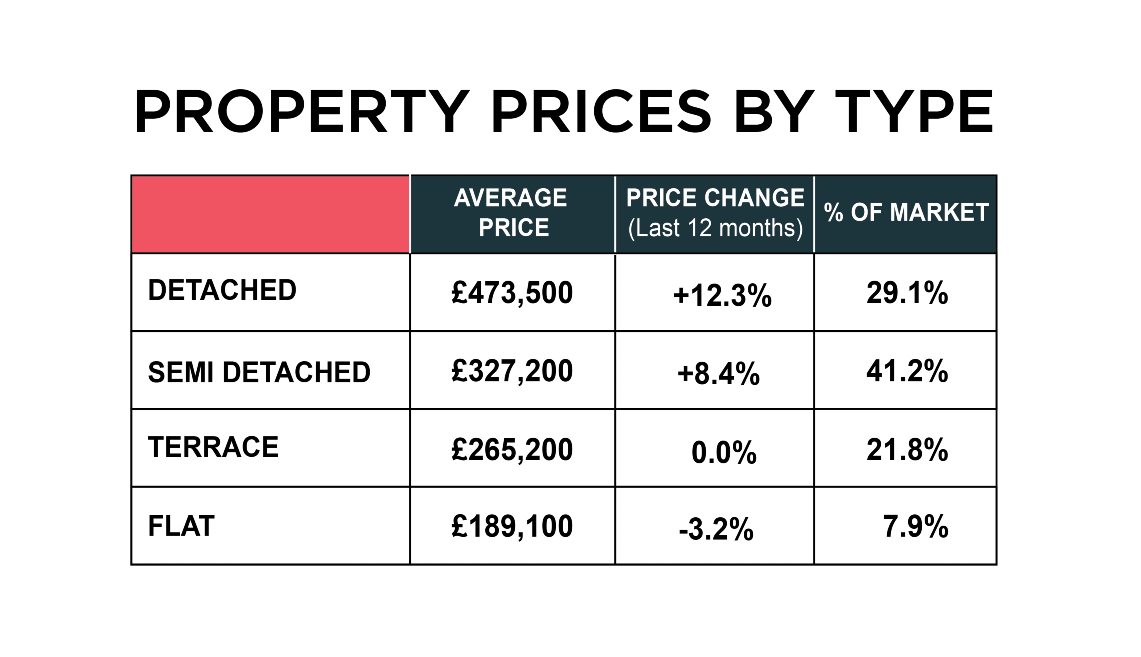 Sales are down but this reflects the lack of stock!

The starkest drop was in the sale of detached homes, down from 47 to just 21 in 2022 or a drop of 55% which reflects the other metrics, but also just re-enforces the problem in the market currently. Drops of 35% in the sale of semi’s and 32% in the number of terraced homes, show just how bad the stock problem is. Interestingly, the number of flats sold remains the same as the year before and the sale of bungalows has gone up 9%. 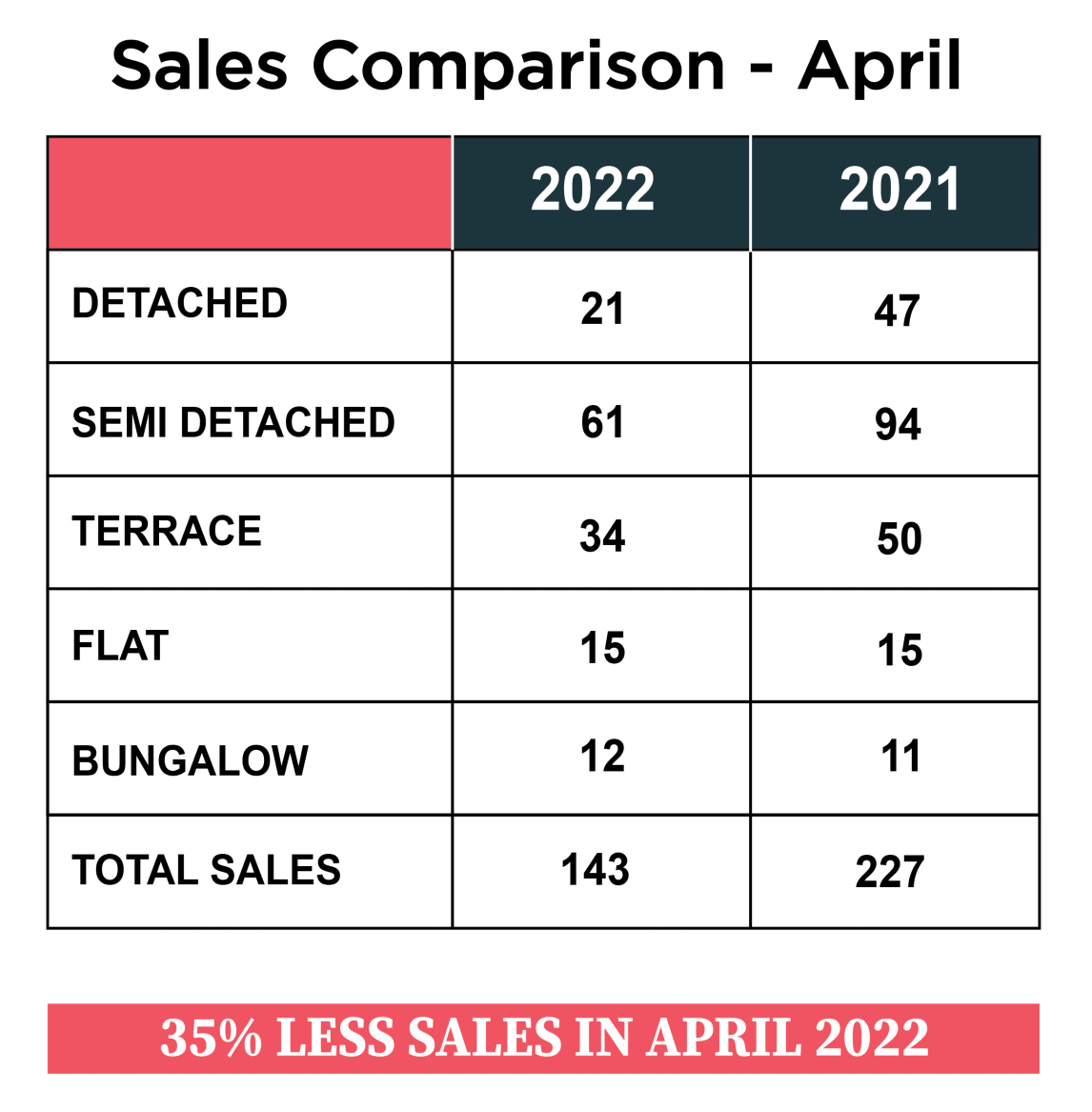 Looking at the longer-term prospects and statistical data available for the local market, it remains our opinion that if you are thinking of moving home in 2022, it would be advisable to bring those plans forward, whilst the demand outstrips the supply. If as many experts are predicting that there will be more properties coming to the market later in the year, probably Q3 or Q4 2022 or into Q1 of 2023 and prices start to slow down, if you want to achieve the best price for your own home, there is a window of opportunity now, but that may be about to close.

If you would like an idea as to the value of your home in 2022, please call Joe, Patrick or Maurice on 0161 428 3663, e-mail sales@mkiea.co.uk or visit our website and choose from our three free valuation options following this link  Book a FREE valuation

June is over and where did that month go? The mid-point of 2022 is pivotal in the property calendar – with six months of trading behind us. All eyes are on the market’s momentum and whether demand is being maintained.

The written media are suggesting a property market crash, the spiralling pressure on household budgets and rising interest rates are expected to take their toll, yet the housing market in SK8 and SK3 remains resillient. But for how much longer? read our latest analysis of the Cheadle Property Market.
Read Article

After years of delays and deliberations, the Renters’ Reform Bill has finally been crystalised in its associated White Paper. Titled the Fairer Private Rented Sector White Paper: a new deal for renting, the contents will soon become law and shape the way lettings is run.